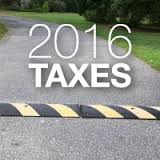 This form is required if you have over $10,000 in a foreign account.  Previously, this form was required to be filed by June 15th and did not allow for any extension of time to file.

This new law is effective for returns beginning after December 31, 2015.  This means FBAR reports for 2016 will now be due April 15, 2017 (the same day as your tax return).  This new law also allows for the same six month extension available for your tax return (an October 15th due date).

The new law also provides that for any taxpayer required to file the FinCEN 114 for the first time, any penalty for failure to timely request or file an extension may be waived by the IRS.